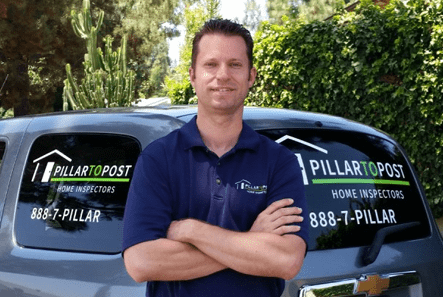 Joseph Lang has run Pillar To Post Home Inspectors of Upland since its opening in 2004. Since 2010, Sylvie Lang has been an active part of the team, turning their marital union into a business one as well. Serving Los Angeles and San Bernardino counties with the largest home inspection company in North America, the couple has endured both a volatile housing market and unfavorable economic conditions to become a top franchisee in the system. Providing inspection services to homes in one of the largest housing markets in the United States, the couple has managed to grow their business through adversity, while also growing their family as well.

Inspired to purchase a Pillar To Post Home Inspectors franchise based on the glowing praises placed on it by Entrepreneur Magazine - praises that now include five consecutive years on the magazine's Franchise 500Â® and Top Home based rankings, along with appearances on its America's Top Global, Low-Cost and Fastest Growing lists - Joseph Lang left his position as a probation officer to become his own boss.

"I grew up watching shows like 'This Old House' and 'Home Time' with my dad, so I've always had an interest in homes," said Lang. "With the reputation Pillar To Post had in the industry, I was confident that I would have access to a business that would endure."

Opening his business when the economy was prosperous and the housing market was booming, Lang made quick gains. But when tough times hit, he took stock and refocused on the core tenets of Pillar To Post that had kept the system thriving since the business was formed in 1994.

"There was a reason that Pillar To Post had remained strong through fluctuations in both national and local housing markets," said Lang. "I came to find that the tough time was great on a personal level for me to reflect about why I had my own business and exactly why I was in the industry. It made me appreciate my clients and put their interests at the center of my business. I saw so many houses where families left overnight; many times I would inspect mostly vacant houses with personal effects like awards and pictures left behind. The experience made me think about what was truly important in life. As I began to put my client first, I also began to truly enjoy working with people and serving their interests, not mine."

As an example of placing an emphasis on his customers, Lang has hired inspector Raul Mendoza who is bilingual, fluent in both English and Spanish. This has allowed Pillar To Post Homes Inspectors of Upland to better reach the diverse population that makes up the Los Angeles area.