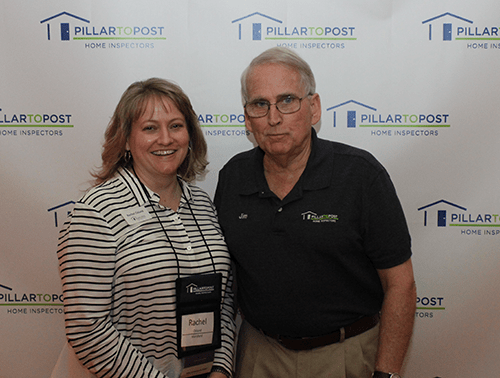 As owners of Pillar To Post Home Inspectors of Columbia, the father-daughter duo of Rachel Oslund and Jim Williams have been a model example of a family business team since 2006. Williams, a former chaplain in the U.S. Army moved his family around quite a bit during his military days, while moving from home to home, Oslund and Williams began to pick up on identifying defects in each home. When Oslund grew up and the timing was right, Pillar To Post became a natural fit for the father-daughter team to establish themselves as small business owners.

"I'm extremely proud of this team for all of their dedication and hard work," said Dan Steward, president and CEO of Pillar To Post. "Their achievements are driven straight from their passion for this business and their love for one another."

As Williams begins to plan for his own retirement, he has altered his role, allowing his daughter to take over the primary operations, knowing that the business is in good hands.

"Rachel has made sure the focus of our business is on customer satisfaction," said Williams said. "She has really made us into an integral part of the community, and it has paid off."

While Williams prepares to retire, Oslund prepares to take the family business over, she knows the importance of being able to work with her father and values the lessons he has taught her along the way, "I wouldn't be where I am today with my father," Oslund said. "We have achieved so much in business together, but the real achievement is being able to work with the ones you love each and every day."